On 23 June 2016, the UK voted to leave the European Union leading to significant political instability and economic volatility:

Now that the UK has voted to leave the EU, there are many political matters that will require decision-making and negotiation at a European Union and UK level. How long it might take, what form it might take and what the end result might be is at this point unknown.  However, as the withdrawal mechanism in Article 50 of the Lisbon Treaty will take at least 2 years from the date of formal notification to the European Council, despite the uncertainty business will continue, as usual, on a day-to-day basis.

GAIM was founded in 1994 and soon became the world’s largest international alternative investment event, known for its high intellectual content as well as the range, quality and quantity of the global investors and allocators it attracts. It has been held in Geneva, Monaco, Cannes, and Cayman.

GAIM is the annual global focal point for global investors to learn about the wider industry and the strategic debate within which alternatives operate, and secondly as an objective platform for the most interesting investment themes and best performing funds globally.

Peter, Nick and Ben were joined by other members of the EisnerAmper Cayman team to participate in interactive workshops and discussions.

Nicholas Tsafos, Audit Partner in EisnerAmper LLP and Director of EisnerAmper Global, has written an article for the February edition of Hedgeweek. Hedgeweek is a real time news driven website focused on hedge funds and institutional investors. The article covers US groups focus on Irish distressed assets and can be accessed here.

EisnerAmper Ireland connect with US colleagues

Alastair MacDonald, Managing Partner, and Frank Keane, Partner and Head of International Business at EisnerAmper Ireland, travelled to the US in January 2016 to meet with colleagues in EisnerAmper LLP’s New York office. 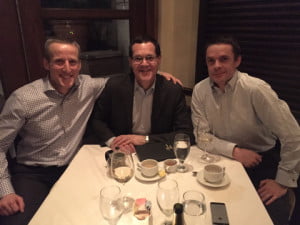 Latest News →
We use cookies to help us to improve your experience of our website. By using this site you agree to our use of cookies. Please read our Privacy Statement to see how we use cookies and how you can manage them.